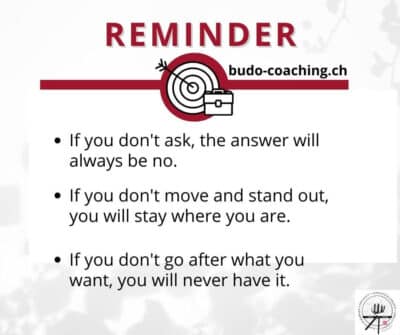 So that your next career jump does not remain a wish.

Are you wishing for a promotion but it is just not happening? Time to step up and figure out why. You might need to start seeking for the reason within yourself.

Indeed, many women tend to underestimate themselves and their performance, as this interesting research on self-perception carried out at a university among biology students also shows.

Without observing these three simple rules, you will hardly make any progress in your job or in life:

Jana’s boss is considering her for a team lead position. Inside, she is bursting with joy – such an important step in her career, she wants it badly.

Since she knows how she has already managed to sabotage opportunities for herself, she decided to work on her ways through private coaching. Her goal is to come across as more convincing and determined.

She has already improved by practicing after attending one of our Budo group coaching sessions: she already feels stronger and more determined.

Now that she has been shortlisted for an internal promotion however, she wants to make sure that she gets the job. With our support, she wants to move forwards and climb the career ladder one level after the other. For many executives and managers, coaching is a key accelerator on the way. Yes, you can tackle several issues with a trusted person, but sometimes you need an external, neutral perspective to figure out what is holding you back.

Sport champions do that too: what top athlete would ever enter a competition without a coach by their side? With whom do they discuss, analyze and optimized their game? Exactly. The right coach at your side can help you improve and move on quicker: sometimes it pays off to get help from external professionals.

Jana is a committed, competent high performer who has been underestimated too often and is now determined not to leave her success to chance.

We exchange ideas, together we work out where her personal challenges lie, where she stands and how she can deal with her insecurity in the future without bending over backwards – with ease and feeling comfortable in her work environment.

Like Jana, many women hinder – often unknowingly – their careers; Jana is working on that and is working daily on her improvement areas since her lack of self-confidence has already cost her a promotion in the past.

Jana used to avoid attention – in meetings, in the boardroom or even in the elevator. Her biggest fear was being approached directly by management. What if she was asked a question and she didn’t have an answer? What would she say, what would she talk about if she didn’t have anything clever to say? She now knows that she should interact and exchange ideas with others to build a good network and attract attention. This is the only way to increase her chances of becoming more visible in the company and placing her valuable ideas.

She has practiced – now she approaches others with more and more ease. She feels more comfortable in her own skin and actually she is enjoying the interactions.

Jana has a hard time voicing her opinion and standing upfront because just the thought of not being 100% ready for a task or statement makes her uncomfortable and afraid of failure.

So she used to wait, seeking validation first- while her colleagues seized the opportunities with no hesitation.

She has practiced and now she never misses a chance to speak up when she has something relevant to add; she brings herself into the game and makes her points during every meeting, even risking getting into discussions; In the past she would have preferred to remain silent, as she tends to shy away from conflict.

Ask for what you want and stand up for yourself

Jana has not shown her full potential yet, she came across as too reserved, so much that others had difficulty recognizing her merits.

Women often believe that their accomplishments should speak for themselves, and they put less effort into talking about them and all the things they achieve. While humility is a positive personality trait, it’s naïve to think that when the time comes to talk about a promotion, your boss, clients, or co-workers will automatically acknowledge or remember your accomplishments.

Women like Jana are often not promoted because they don’t come forward and apply. Jana was stunned when the possible promotions of several close colleagues were announced. She wondered why she hadn’t been considered. After a few days of brooding, she prepared and asked why: she mentioned the many tasks she had mastered, how she had successfully completed project XY, adhered to the budget, led ad interim a team and even initiated measures, which had led to a reduction in costs.

Her boss had moved on and had no idea who had contributed to what in detail anymore. All in all, what she had staged and managed was impressive, but unfortunately fell under the radar as a team effort because she simply worked without talking about her personal contributions and “marketing” herself. The meeting with her boss was an eye-opener and a booster at the same time.

Because she stood up for herself and positioned herself clearly; Jana is now on the short-list for the team lead role as well as one step closer to her promotion.

So there you go, first three simple rules:

Coaching women we realized that to boost their career development they mostly need to change their approach. Small adjustments in behaviour, increased self-confidence and trust in their abilities not only can improve their standing but their overall satisfaction at work.

Self-assertion has a strong impact on attitude: letting go of the belief that you are weaker or not good enough than others opens up to new possibilities. The more aware of your strength you become, the better you can use it, assert yourself, or overcome obstacles.

And the nice thing about it is that you will be more gratified in whatever you do, because you are not just people pleasing but you stand for your own views and values; Instead of just putting up with what you think is expected from you, getting hit from the outside, you can have a say, proactively take things into your own hands and help shape them.

Get in touch and get going!

Voice your opinion: 5 sentences you can practice at work

You don't have to shout to be heard, seen or taken seriously   Are you…

How to untie the knot Our life consists of choices. As soon as we get…